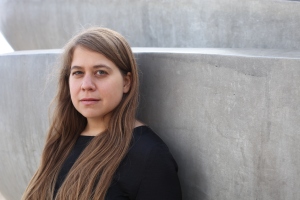 Julia von Lucadou (photo by Maria Ursprung) is the author of a marvellous book, Die Hochhausspringerin: Convenzionali is so happy to interview her.

You live between Switzerland, Germany and US: where are you now and how are you living the Covid emergency?

Fortunately for me and the climate, I recently narrowed down my living situation to one country and one place: Köln, Germany. I feel lucky to have gotten out of New York City before the corona virus hit – the reports of chaos and despair from there are very discouraging and I am worried for my friends. Right now I am, like almost everyone else, staying at home with no toilet paper, chasing my partner around the apartment for exercise, having deep conversations with my potted plants and worrying about the health of people I love.

Who are Riva and Hitomi, your protagonists?

Riva is an athlete, or at least she used to be. She was a star of high-rise diving – a sport I invented for the book – but she suddenly quit without explanation. Hitomi, a young psychologist, has been hired to get Riva back on track. She surveils Riva in her apartment and analyzes her digital data to figure out what went wrong and fix it. Both are of similar age and status but behave very differently: Hitomi believes uncritically in following the rules whereas Riva seems to question the values of their society more and more. Their fates are tethered: If Hitomi doesn’t manage to get Riva back to high-rise diving, both will be expelled from the comfort and stability of their homes in the city to the peripheries – a slum outside the city where the poor and unsuccessful live.

Why did you decide to write this book?

Like my protagonist Riva, some years ago I started to question my own values. When working 12 hours a day in television, I realized that I was exploiting my own body and mind in the name of productivity. I had internalized this capitalistic ideology where a person’s value is determined by how much they work or how much money they make. When I realized how unhealthy that was, I quit my job in television and started writing this book to figure out what had happened to me – and to a lot of others around me. The novel was a great way to reflect and think through issues that were on my mind.

Do you think the world you imagined is really just a dystopia? It seems very realistic, unfortunately… How can we avoid the exasperations you have described so well, and what do you think about the power of popularity and social network?

The dystopian world in my novel is deeply rooted in the present. In the book I exaggerate elements of our world to be able to see them more clearly, to see how they could develop. We, in Italy or Germany, don’t live in a state of complete surveillance yet but the seeds are already there: We happily let private companies invade our privacy every day on our digital devices, for example. We also judge ourselves and others harshly every day on social media, comparing ourselves to impossible standards. There is a sense of exceeding competition and perfectionism to our neo-liberal system. In trying to perform like machines we might lose humanity – like Hitomi in the book.

What do you think society needs nowadays?

We are in the middle of a crisis. A lot of us are anxious and worried about the future, about our health, about our financial stability – for good reason. I think what we need now is each other, we need to remember that we are all in this together and all have some social responsibility. And maybe we need to rethink some capitalistic values that reward risky, competitive and selfish behavior. The corona crisis has shown us that the people essential to our survival are not the bankers and CEOs of giant retail companies. Why do we not reward care workers and educators accordingly? The development in autocratic regimes shows that a crisis like this can be easily exploited to tighten control and manipulate people. Let’s not be ruled by fear, let’s not be seduced by the promise of easy stability. Let’s not start tracking everyone. Let’s not spread conspiracy theories. Let’s remember our human rights. Let’s not lose hope.

Which is the next book you are going to write?

I am a fan of secrets. To keep myself interested in a project it has to stay mysterious even to me, I don’t want to know exactly what it is about or what exactly will happen to my characters. So all I can say is: I have my ears to the ground and I am listening.

My favourite book and movie change almost every time I read or watch a movie. I guess I am easily seduced by art. (laughs) The other day I watched my now favourite film, the beautiful and strange Hungarian love story On body and soul. The last book I read and loved to pieces was Lauren Groff’s Florida, a highly atmospheric compendium of short stories set in the lush and hot American state of Florida.